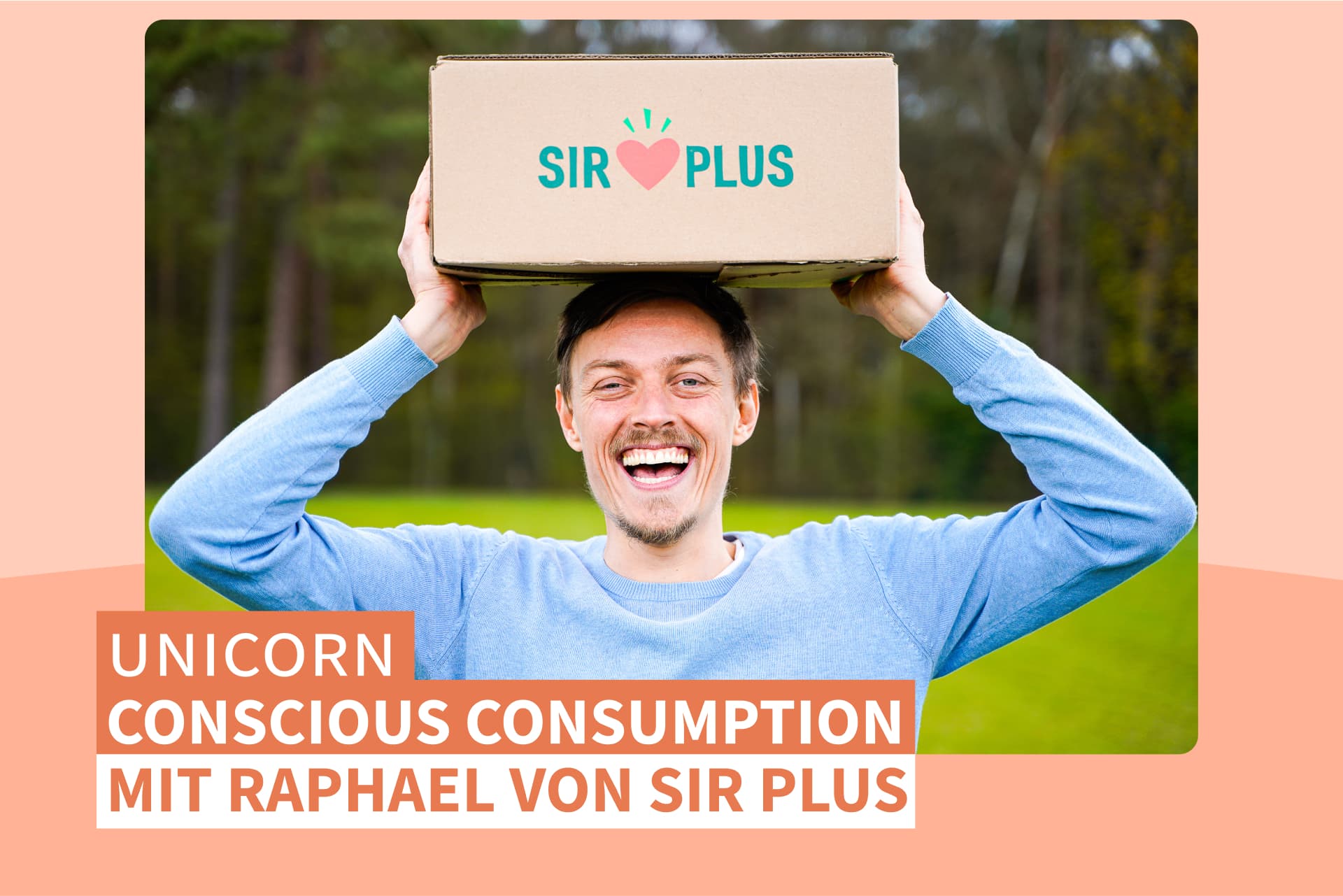 Raphael Fellmer, the founder and CEO of SIRPLUS, explains how his company evolved from his five years of being on a money strike – that is, living on goods which he acquired without money. SIRPLUS is an online supermarket where grocery items can be conveniently ordered as food boxes, and customers can also receive food boxes on a subscription basis, making it a simple way for people to prevent food waste. Grocery items are bought from producers and wholesalers who are unable to sell the goods in their usual manner. This allows the surplus food to remain on the market, thereby reducing waste. The success story of this Berlin grocery rescue began with Raphael’s money strike. In the following interview, Raphael details his strike and reveals what lies ahead for SIRPLUS.

A 5 year long money strike – how should we imagine that in a consumer society? Could you describe for us a typical strike day?

For me, the money strike was about steering attention and awareness towards our throwaway society, the goal being that everyone starts to think about what they can do to prevent or reduce waste. At first, I was rescuing food items from supermarkets: in the beginning directly from the waste containers and later on, in a joint effort with the supermarkets themselves, which led to the creation of probably the largest voluntary food rescue movement, food sharing. Friends, acquaintances and neighbors gave me the clothing they no longer needed, so I had something to wear – keep in mind that every year in Germany, over 1 million tons of clothing are thrown away. And it worked out this way with other consumer goods, too. As far as living goes, we stayed in places that were made available to us by various private people or associations.

How can we get society to be more conscious about its food consumption?

For one thing, I think it’s especially important to make people aware that 50% of all food in Germany is wasted, and half of this waste occurs at home. How can we combat that? Try taking a look at a grocery item, smell it and taste it, instead of just checking its expiration date. We have to put more faith into our senses, plan our food shopping better, and not just reach for the grocery items that look perfect in the supermarket. Or, start ordering rescued food from SIRPLUS and get involved in food sharing.

In Germany, approximately 18 million tons of food are thrown away every year. What, in your opinion, are the main causes for this huge amount of food waste?

That’s due to the expiration date, among other things. As I’ve already mentioned, a lot of food is trashed according to its expiration date, but it’s actually still edible. The problem is that we really can’t really afford to support – ethically or ecologically – this sheer waste of food. But we do it anyway, because we can afford it economically, and that’s how we’re losing our perspective in regards to the earth and to food. As a result, you can calculate that every single person in Germany wastes several hundred euros worth of food per year.

50% of food has already become waste before it ends up in our homes, because there’s wastefulness occurring along the supply chain. Which means that supermarkets are not only responsible for the wasted food in their trash containers, but also for that of producers and farmers, by giving them specific norms to follow. They can’t know exactly what their fields will produce or how their crops will grow, and their products don’t make it into the supermarkets when they don’t conform to these strict rules determining when a fruit or vegetable is too big, too small, too straight, too curved, etc.

During the Corona pandemic, all of the SIRPLUS rescue market locations closed permanently. Will SIRPLUS ever come back onto the retail scene? Could you see SIRPLUS being represented among the large and wide array of supermarkets?

We’ve closed all of our retail stores and are now focusing entirely on doing business online. We’re offering subscriptions for various boxes, like the Everday Box (vegan or vegetarian) and the Organic+Vegan Box. All together, we currently have 6,000 customers across Germany who have become part of the movement and are rescuing food with their subscriptions. We’ve also begun to ship fruits and vegetables throughout Germany. We don’t know at this point if we’ll return to having retail stores again, we don’t have any plans to do so at the moment. Right now we’re fully concentrating on developing our services to help customers save time and reduce their ecological footprint while bringing them more overall satisfaction.

What do you see in the years to come? What will food consumption be like in the future?

I really believe that, even though we can financially afford to throw away food, we’ll start appreciating it more because of sustainable and social reasons. I hope that food will no longer be just another kind of commodity, but rather, that it will be viewed like water: yes, I could waste it, but I turn off the tap because I know it’s the responsible way of handling this resource. In the future, society and politics have to stop limiting the value of food based on its appearance – the focus should be more on its quality and taste. The goal of the United Nations (which Chancellor Merkel also showed her support for) is a 50% reduction in food waste by 2030. This goal can only be achieved when policy makers and the food industry, as well as private individuals, all pull together and do their part.

Before we finish the interview, we’d really like to know if you have any food rescue tips for our readers.

It’s also helpful to make a shopping list for your groceries, and of course, help to rescue food with SIRPLUS. And if you have food that’s expired, trust your senses and test it. Sometimes a yogurt that’s eight months past its expiration date is still completely edible. Just simply have a conscious approach towards food while grocery shopping.

Raphael, thank you very much for sharing your interesting insights and experiences with us about SIRPLUS and the food rescue movement! It seems that our society and our politics have a long way to go before reaching the goal of properly appreciating food!