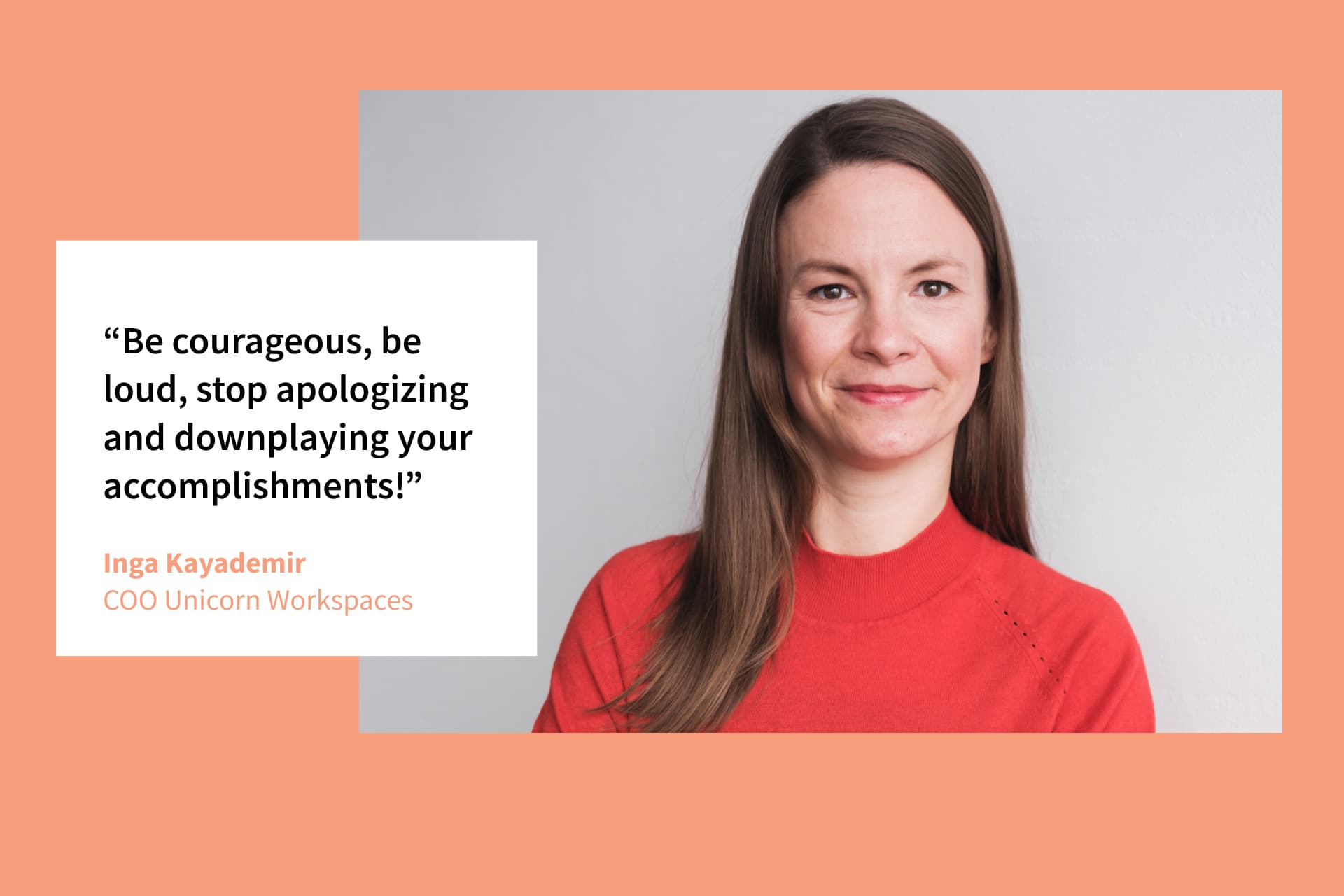 5 Questions for our COO, Inga Kayademir

What do you think female leadership stands for?

Leadership is often associated with typical masculine attributes, such as assertiveness or negotiating power. For me, female leadership means that women are equally self-confident, obviously contributing their strengths to a company and claiming leadership positions for themselves. And while doing so, they don’t need to hide themselves or try to emulate a stereotypical type of “leader”, they can go their own way.

When I compare the situation ten years ago to the situation today, I have to note that it’s still moving forward too slowly. Women in leadership positions are still the exception, and there’s a lack of visibility. When it comes to expert knowledge, women are just as good as their male counterparts. Yet women are still facing difficulties: once they’re within positions of power and along the way to reaching them. They are still being confronted with biases similar to those which they faced 10 years ago, for example, that they could be too emotional or not resilient enough. Moreover, it’s still widely assumed that every woman wants to have a family, and that the desire for a family and the demands of a leadership position are not reconcilable. Yet for men, this is an issue that is still rarely addressed. But at the same time, there have been some positive changes. There are increasingly more strong female role models out there, which is heightening the visibility of women in positions of power. Female networking is also on the rise. Language is finally being adapted to reflect more awareness and a broader inclusion of genders.  That’s a really big step because of the impact language has on our society, this can alter what images come to mind when we communicate. I hope at some point, for example, that we’ll see the end of typical “masculine” and “feminine” professions.

How do New Work and leadership influence each other?

New Work is increasingly changing our understanding of work. Instead of relying on the traditional 9-to-5 office job, there’s growing interest in digitalization and flexibility. More attention is being given to freedom, independence and community participation. For many women, this means they no longer have to decide between having children or having a career. Flexible working times, increased digitalization and being able to choose where you work from is providing more compatibility for family and career. And it’s causing many men to rethink their situations, too. This compatibility is becoming something normal to have, and accordingly, it’s becoming a matter of course to demand it.

How do you assert yourself as a female leader?

Freshly graduated from university, I approached things quite naively. I couldn’t really imagine that I, as a female leader, would be perceived differently than my male counterparts. But I figured it out pretty quickly, when it was assumed that I was the team assistant and not the project manager, or when male colleagues wanted to dispute my technical knowledge. Essentially, how you are perceived is different: while men are viewed as especially “assertive”, women, in contrast, are considered “bitchy”. And while men can be “fiercely passionate” about their work, women are simply “too emotional”. I don’t really like it when, for example, within my role as an executive, someone brings up my two kids. I don’t want to have to explain how I manage having family and a career. Certainly not as long as it’s something which only women are spoken to about. ;-)

I grew up in a really emancipated family. My grandpa as well as my father always made it clear to me that I can do everything that men can do. That heavily influenced me and contributed to how I see myself, and it’s something I’ve always been able to profit from. I don’t think I behave differently or manage my teams any differently than my male counterparts. But I do have a voice which I make use of if I feel that I’m being treated unfairly. Recently, those of us in management have been giving each other feedback on a regular basis, and this is helpful for considering your own behavior and for identifying stereotypes early on or averting them. I think it also helps to know your own strengths and weaknesses, and to act accordingly. Pretending to be something I’m not in order to conform to a particular stereotype – that won’t benefit me. Everyone has to discover their own, authentic leadership style – even when you’re not going to be able to please every employee by doing so.

Who has inspired you and what advice would you give to young, aspiring female leaders?

I’ve always been inspired by women who have taken their own way – against all odds and against the “norms” of society. When Ruth Bader Ginsburgh was at Harvard, she was one of nine females who were studying law. She went on to become incredibly successful in a profession dominated by men, remaining true to herself in the process. She committed her whole life to women’s rights and equality. Now onto something non-work related: I’m a passionate long-distance runner. In 1967, it was forbidden to participate in the famous Boston Marathon, or any other marathon for that matter, if you were a woman. Because women are too weak to complete a marathon, that was the reason given. But Kathrine Switzer used a clever loophole to register herself for the Boston Marathon. And she was a finisher, proving not only that women can run a marathon, but they can also be much faster than many of the male participants.

So the biggest piece of advice that I’d like to give is this: get out of your comfort zone!

If you want to get ahead and develop yourself further, you have to take some new paths every now and then. Sometimes that path will be wonderful, sometimes it won’t be so great. You’ll encounter failure along the way, but you’ll get over those failures, and the memories of them, too.  Don’t dwell on those moments, think instead about how you’ll handle it differently next time. Be courageous, be loud, stop apologizing and downplaying your accomplishments. I’ve seen it way too often – how women will qualify their good achievements when they’re pointed out. Always ask yourselves: is this still worth it for me? I was previously in a large consulting firm and constantly had the feeling that I was fighting a losing battle. I was the only woman on the team, I had to continually assert myself, I was always competing with my male colleagues. It was an absolutely toxic environment. Then, at some point, I decided that I didn’t want to pursue success at all costs, and so I switched to another employer.

#4 A Day with Sandra (univativ)

„ A CV never tells everything about a person" - spend a day with univativ COO Sandra.

Start-up Talk: Of Unicorns and Zebras

Ok, Unicorn Zebraspaces was just a little April Fool’s joke. Yet what’s it all about, this talk of unicorns and zebras in start-up lingo?

“Our advice for a good start to the day: a double espresso.” - spend a day with VT-Verlag founders Victor and Tom.

“Last year, I didn’t attend many digital networking events because I didn’t get that much out of them.” - spend a day with Laori founder and CEO Stella.